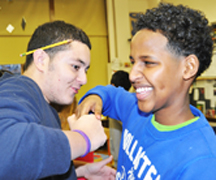 Last fall, I decided to use the Circle of Power and Respect to work on social
skills that foster respect for everyone.

Before the year began, as I
organized my chairs in a circle for the first time, I predicted the tone of my
daily first-period homebase would be calm, orderly, and fun, one in which
students accept individual differences. The previous year’s homebase had not
been pleasant: students were often condescending toward each other, talked
during announcements, refused to listen to directions or to each other, used the
time to hastily do homework that should have been done the previous evening, and
had no interest in participating in activities or building a community.

A better beginning
During the first week of school, my new
homebase students sat quietly and were respectful to me, but weren’t very
willing to participate in anything new. I persevered, however, by continuing to
introduce community-building activities. Gradually, they warmed to this new
homebase structure, and they all knew each other’s names by the end of the third
week.

By the middle of October, my students were smiling, talking, and
laughing as they entered homebase. As they entered every morning, many students
greeted me before I could greet them. They started to ask for and look forward
to the activities that we did. But what really got me was when they started to
call themselves a family when we went to breakfast and as they entered my room.
At breakfast, they began to have appropriate social conversations. They also
kept an eye on each other and started to discourage anyone in the group from
trying to “sneak away from the family.” This was fun to watch, and was such a
change compared to last year!

Annette Petersmeyer is a FOCUS Teacher
at Morgan Park School in Duluth MN.