Cultivating and Celebrating the Rules 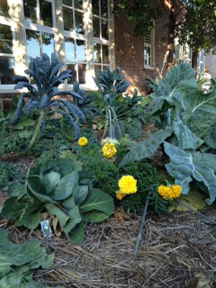 When I was a classroom teacher, the way I approached rules was very similar
to the way I garden. Let me explain!

In late winter, as the weather
begins to warm, my thoughts turn to planting. I think about what I want to grow
this year, and I buy the seeds. When the threat of frost wanes, I carefully till
the soil and plant my seeds. I stand over my freshly planted garden and water it
with as I contemplate the harvest that lies ahead. “So far, so good!” I say to
myself.

Then my garden sits. Plants grow slowly. I get busy with other
things. I see my garden out of the corner of my eye each day as I rush by.
Sometimes, I forget to water it, causing the plants to droop and falter. I don’t
weed as often as I should; when I get around to it, the weeds are sometimes far
more plentiful than the vegetables. Pulling them out becomes a real chore.

Although I sometimes forget daily maintenance, like weeding, I still get
lots of veggies come harvest time, but they are not as beautiful as they might
have been, nor as tasty.

Opportunities for cultivation
At
first, my approach to classroom rules was similar. On the first day, my students
and I thought about the year ahead. We shared our goals and created rules we
felt would help us reach those goals. We looked at our social contract and
thought to ourselves, “So far, so good!” before signing our contract and posting
it on the wall. And there the rules remained, drooping and sagging off the wall,
neglected, except when things went so wrong that we were forced to turn
to the rules to resolve big issues. If I forgot the daily maintenance, weeds
grew quickly. Sometimes I missed opportunities to cultivate and celebrate the
rules—to make them truly proactive, as they are meant to
be.

Growing the students
Why do many students dislike rules?
One reason is because we call attention to them only when things go wrong, so
they see them as negative—a big drag—and to be discussed only when the teacher
is disappointed or mad. This prompted me to think about what I could do to make
them a positive part of our classroom, and to lead students to live by them more
proactively. I needed to cultivate and celebrate our rules on a daily—even
hourly—basis, so they could begin to see them in a positive light. I needed to
help my students think about what we were doing well, and how living by the
rules helped us succeed. I also wanted to use our Social Contract to set goals
for what we needed to do better.

Ideas for cultivating and
celebrating classroom rules
DOTS “I Rock, We rock”
At the end of the
class period give each student two sticky dots of different colors. Have them
place one colored dot on the rule they followed well that day and the other on
what they felt the class as a whole did well that day. Have a few students share
specific examples.

THE BOX
Create a box, into which students can anonymously
slip written examples of others’ behavior whenever they see someone “living the
rules.” Naming students observed is optional. Place the box near the social
contract. From time to time, pull out a slip and share it with the class and
celebrate!

SECRET FRIEND
At the beginning of the week or class period,
students randomly draw a partner. Tell them to watch their “secret friend” that
day or week, noting examples of how they see their friend living the rules. At
the end of the day or week students acknowledge their secret friends by sharing
what they noticed and how it connects to the class Social
Contract.

PARTNER SHARE
Students pair up and share one rule they are
going to work on during class. Partners brainstorm things they need to do to
live out that rule. Tell them to watch one another and plan to quickly check in
with each other at the end of the period. What did they notice? What were some
examples of their partner living the rule?

PERSONAL CHECK-IN
At the
end of the class period, do quick self-assessments of how well the rules are
being honored. Read each rule and have your students think about it before they
give themselves a thumbs-up or a thumbs-down. You could do this privately
(behind a notebook) or for all to see.

NOTE TO SELF
Each student
receives a Post-it note and writes a quick note to him/herself, naming a rule
they are going to live by that period. At the end of the period, they assess
themselves and note an example (or evidence), writing both on their Post-it.
This note becomes their “ticket out the door.” Collect all tickets.

ON
TARGET
Create a target symbol on paper. Choose a rule for the class to work
on (or one gleaned from one of the above activities). Talk about what the rule
means and what it looks like to live it. At the end of the period give each
student a dot and have them place the dot on the target showing where they felt
they were that day. Were they on target or did they miss the mark?

IT
TAKES EFFORT TO CHANGE
At the start of a class period, invite students to
read the rules. Have them select the rule they believe will be the most
difficult to follow during that period. Then invite them to predict how much
effort it will take to successfully live by it. On a scale of 1 to 5 (5
representing the most effort), students may write their predictions in their
academic planner. At the end of the period, students look at their predictions
and assess how much effort was actually required to follow the rule
selected.

I NOTICED
Name it! If your students are doing something
well, don’t forget to say so. Be specific: let them know what you are seeing,
how it reinforces the rules, and the impact the positive behavior is having on
your classroom and learning. This can be done spontaneously in the flow of
learning, or at specific times such as at the start or close of class. I’m
seeing a lot of peer-to-peer support during our work today. People are helping
each other with ideas and encouraging each other.

SPONTANEOUS
CELEBRATIONS
Have a party! If your students have been living the rules, why
not have a party to celebrate? However, don’t dangle the carrot (“If you behave
according to the rules for the next two weeks, we’ll have a pizza party.”); this
is a recipe for resentment. Students don’t want to be manipulated, but they love
surprises and celebrations.

Reap what you sow
I wish I’d known
about all these strategies (and the importance of making positive connections to
the rules on a daily basis) earlier in my teaching career. After years of
teaching students and adults, and observing classrooms in which students feel
the rules are only brought up when they’re broken, I have become convinced that
you’ll have a more bountiful harvest—a more successful school year—if you do
daily rules maintenance. The key is getting into the habit of making proactive,
positive connections to your social contract. Teach students to see the rules
positively, as desirable, as guideposts; to “live the rules” and reap the
benefits of knowing that good rules help everyone learn and grow. Happy
cultivating!

Tracy Lysne taught math to middle schoolers in Hudson WI
and Minneapolis MN. She is a Developmental Designs facilitator.