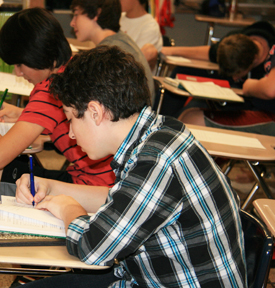 Last year I toured a middle school in Reading, Massachusetts, and was struck by the peaceful, centered feeling in the place. Soon I discovered a cause: Classes had just transitioned, and every classroom was using a Do Now approach, suggesting a quick task such as a short reading or writing assignment to center students on learning even before the bell rang. I wanted this for my classroom and my school!

After the visit, I created and announced a daily Do Now routine. Things improved, but the results didn’t match what I’d seen in Reading. By the end of the school year, I felt myself getting annoyed when students did not enter quietly and get right to work.

Reflecting on my limited success, I realized I only verbally explained the process for entering and getting to work and expected them to succeed. I never modeled it or had them practice or helped them understand what to do when issues arose. I rarely mentioned the process after we started it. I guess I assumed that since they were in seventh grade, they knew how to begin and end class.

This past summer, as I prepared for the coming year, I decided to do everything I could to establish an effective routine for the beginning of class. I used several Developmental Designs practices to this end.

I began the first day of classes by modeling, practicing, and enforcing the way students need to enter the room and complete the Do Now. I sought their endorsement of the routine by starting with questions such as “Why is it to your advantage to enter class ready to learn?” and “Why is it important to begin learning right away?” Their answers showed they understood the importance of the start of class to the rest of the day’s learning.

Next, I modeled exactly how to enter the room, be seated, read the Do Now assignment, and get started.

Afterward, I asked what they noticed. They had caught all the little details. Then we all practiced the routine exactly the way I had modeled it. Finally, we discussed a couple of the situational dilemmas that can arise. I asked, “What if you are late?” and “What if you forget something in your locker?” and we planned for these sticky spots. I ended by declaring the expectations we had set.

Two days later, I wanted to reinforce the expectations so behaviors wouldn’t slip. We composed Y-charts together, and I posted them in my classes. Here’s how one read:

As soon as it was approved, I connected our routine for entering class to these three rules by carrying on discussions with the group. I asked open-ended questions, like: “How does correctly completing the Do Now build community?” or “What will we gain if we give 100% of our effort to the Do Now?” Many students made insightful connections between the routine and our Social Contract. Thereafter, I regularly invoked the Contract before, during, and after the Do Now routine.

I have tried this year to speak in a neutral tone, be specific and concise when giving directions, describe the actions I want to reinforce, and speak realistically, relevantly, and respectfully. I give students reminders before they make mistakes, and, sometimes, as a reaction to a mistake. For example, I’ll ask: “Who can remind us how to enter the classroom respectfully?” to reinforce things that are going well but also to point out when things are starting to slip. Sometimes a situation calls for a clear redirect such as, “Charlie, you need to back up and try again.”

I involved the students in planning and reflecting about our Do Now process. I tried to get them to think as they entered the class. I often greeted them at the door as they arrived and asked them a planning question such as: “What materials should you have when you arrive?” I asked a planning question at the end of the period, to plan for tomorrow. During the Do Now process, I sometimes asked: “How well are we following the routine we established?” After the Do Now process and before we moved on, I sometimes asked: “What is going well during our Do Now routine, and what needs improvement?” and we listened together to a few student responses.

When a student didn’t follow the guidelines for entering the classroom, I used a flexible system of redirects. I modeled and practiced with the students how to respond to my cues and taught them that it wasn’t so much which cue they got that matters as how they responded. We talked a lot about their job: To cooperate, quickly reflect on what had just happened, and return to the work of following the Social Contract. I used redirecting language, Take a Break, non-verbal cues, and proximity.

I tracked the success of our efforts in a few ways. I measured the amount of time each class spent on-task during the daily Do Now. I posted these on the board. Classes soon began to compete with each other to get the best times, and they enjoyed the friendly competition. To get the Do Now done sometimes required nearly total silence, while other times involved sharing answers with a partner or moving from one place to another. In short, some were noisier than others. The definition we used for being on task, therefore, evolved to: Get the job done without distracting others.

A survey
I surveyed 50 students in mid-November about the routine. A few survey questions and responses included:

The Do Now has transformed our science classroom into a more predictable environment with routines that set students up for success. There are fewer distractions and instances of students not being prepared. I learned a lot from the process of revisiting my Do Now routine. I’m glad I kept at it!