Putting Social Skills to the Test 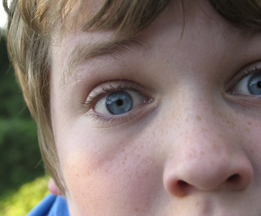 My increased efforts in building community supported my advisory class
through a challenging process of welcoming a student with difficult behavior. I
wanted to build a better community for my students this year in the hopes that
they would be more engaged in class if they felt comfortable with their
classmates. Just as our work together was beginning to pay off, an unexpected
request from a student to join our group threatened to upset
everything.

Building social skills
I began the year with my
students by addressing cooperation, responsibility, and self-control on multiple
planes. After completing charts about how these social skills look, sound, and
feel, students completed a written assignment and provided a definition for and
real-life examples of each skill.

Student definitions of cooperation included:
– Working together to reach a goal
– Being responsible for completing your
part of a task

Classes described responsibility in many ways, including:
– Anything we do because it is expected, necessary, or appropriate

Most students felt that self-control was:
– Thinking about what you do before you do it
– Controlling your actions and emotions

With the expectations for the above-mentioned social skills mapped out and modeled, the class and I felt we were prepared to try practicing them in context. I felt good about how I had modeled and scaffolded these social skills, and believed students’ self-management skills would improve. Things were progressing swimmingly. 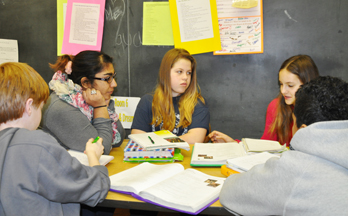 An unexpected challenge
In early November, I was
asked to accept a new student. Todd had many behavioral issues, including:

He had burned many bridges between
himself, his teachers, and his peers. All parties involved, including Todd’s
parents, felt Todd needed a fresh start—one we could provide in our advisory.
While I make an effort to see the best in all students, viewing Todd in
this positive, nonjudgmental way was not easy at first. I was given control over
the decision, and I decided to discuss it with my advisees.

Gathering
student input
I called a meeting in advisory one Friday morning, during
which I explained the situation. Initially, a few students were highly opposed
to the idea of bringing Todd into our community. One boy said that he did not
believe Todd was capable of being appropriate; this student “did not want
trouble.” Another thought he was “too mean, too cool, and too bad” to be a part
of our group. One student said she would be willing to accept Todd into our
group if he could improve his behavior and have a good year. We were split over
the matter, and everyone had concerns.

I asked my advisees to generate a
list of questions and concerns about Todd’s behavior and present it to him. If
he responded positively to our concerns, I argued, Todd should be given a
chance. My students felt that, after addressing their questions, Todd’s effort
should culminate in a plan detailing what he would do to be a successful part of
our group.

Here are some of my advisees’ questions for Todd:

We respect
each other and enjoy each other. Will you show us the same respect we show each
other?

We have a routine that we are comfortable with. Will you follow
our routines or be disruptive?

We trust each other and we
know that we will not hurt each other’s feelings. Can you promise that you will
not break our trust or hurt our feelings?

We respect each other’s
personal space. Will you take our stuff from us, hide things, or damage our
property?

We’re working on cooperation and being responsible. Will you be
co¬operative and take responsibility for your actions?

Are you going to
behave in a way that will create tension or discomfort in our advisory or can
you show us self-control?

I liked the list, and I was glad to see my students had included the social skills we’d been highlighting all year.

I gave the student-generated set of questions to Todd and asked him
to think about them over the weekend, discuss with his family some strategies he
could employ to meet the community’s expectations, and join our advisory for
lunch the following Monday, where we would await his response. Todd agreed to
consider our requests. On Monday, he assured us that he wanted a “fresh start”
with us because we had shown him respect. He had not associated much with my
advisees in the past, and I think he realized that this was an opportunity for
him to grow. We decided to hold him to this declaration and allow him to join
us. I was proud of those students who had initially opposed the idea. They
showed empathy and the ability to change their minds in giving Todd a chance.
Once we committed to Todd Joining our advisory, we were determined to make it
work for all of us.

Todd’s growth
We began moving forward under
the proposed agreement. One day, after Todd had been with us for just over a
week, I observed the following:

As my students entered advisory, I
greeted each one personally, as I do every morning. My students then greeted
each other and engaged in conversations. Most greeted our new member, though
some were still cautious. 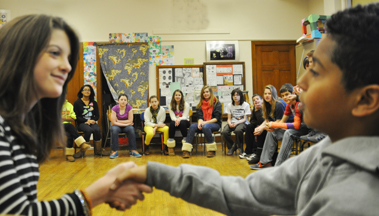 On this day, we were preparing for our
student-led conferences. We read the daily greeting, which asked students to get
work from all of their subjects to put into their portfolios. Students gathered
their materials and sat on the floor in a circle. We shuffled through each
subject, brainstorming the traits of high quality work that would merit
including in our portfolios. Students asked each other for recommendations of
work samples, and even discussed what they had learned in the assignments. They
engaged in conversation without talking over one another, and they remained on
task. No one shunned our new student. Rather, they listened when he had input;
one student even asked him for ideas about work.

Before the students left
my classroom that day, I noticed one student having a personal conversation with
Todd. I couldn’t hear their conversation, but I could tell from their smiles and
gestures it was positive. This student was one who had been highly opposed to
Todd joining us.

This anecdote is only one example of how Todd was
fitting in, having a better year, and how students were able to see the good in
him.

I think that having his peers set expectations for his behavior
meant more to Todd than any teacher’s concerns. The meeting we had before Todd’s
arrival was key. I wasn’t sure how it was going to turn out, and I didn’t expect
them to come up with the idea of framing their concerns positively, in the form
of questions. But my students took control of the meeting, and the quality of
the outcome was outstanding; frankly, it went far better than it would have had
I made the decision by myself to accept Todd. Giving them some autonomy was
integral to our success, and all of them, including Todd, demonstrated
cooperation, responsibility, and self-control!