Starting the Year Off Right with First-year Middle Schoolers 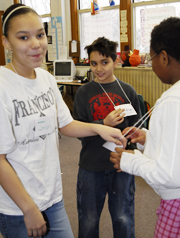 Last fall, our Hopes and Dreams activity (goal-setting) helped set the tone
for a term of productive learning. It gave sixth graders a chance to set goals
for the term and to become oriented to our middle school’s social, academic, and
behavior expectations.

Here’s how I took my students through the process:

New freedoms, new responsibilities
I started by leading a
brainstorming session focusing on how middle school differs from elementary
school. During the session, many of them mentioned how much they appreciated the
new-found freedoms we offer, including walking through hallways without forming
a line; offering many classes with many different teachers and classmates;
having a midmorning break during which they may go to the cafeteria for a snack;
and playing impromptu soccer games in the gymnasium before school.

Many
also mentioned new challenges they were about to encounter, such as having more
homework; the importance of completing assignments on time; on-going time
management issues (moving quickly from class to class); a greater need for
organizational skills; keeping backpacks and lockers neat; and getting along
with a lot of new people.

A juggling act
I engaged students on
an activity called Group Juggle to demonstrate the demands placed on middle
school students. We began by tossing one ball around the circle in a pattern so
that each student received and threw the ball once. As the ball was passed,
students said the names of the students from whom they received the ball and to
whom they tossed it. Once the pattern was established, I added more balls of
different shapes and sizes until we were tossing several balls simultaneously.
We stopped occasionally for discussion about how we could improve the game.

Afterward, we discussed how this activity was like the dynamics of
sixth grade. Students responded, “We have to work together to accomplish
things;” “We have to focus on the task at hand;” “We have to be aware of what
comes next;” and “We have to juggle our classes, homework, friends, and
after-school activities all at the same time.”

Hopes and
Dreams
Next, students decorated one side of a 5″ x 8″ index card,
including their names and symbols representing some of their interests and
abilities. On the other side, they wrote two academic and two personal goals for
the term. Here are some of their goals: “I want to learn to be more organized.”
“I want to try hard to understand math more and pay closer attention in class.”
“I want to keep up my personal standard of good grades.” “I hope to hand in all
of my assignments on time and really be on top of my school work.” “I want to
improve my typing skills and learn how to touch type on the
computer.”

A structure for fulfillment
Of course, goal-setting
alone isn’t enough. We needed a structure of support for the students’ declared
hopes and dreams. Therefore, group agreement and guidelines for our behavior-a
Social Contract by consensus-came next. In turn, I supported the Social Contract
by modeling and practicing routines and by developing expectations for specific
situations during the day.

Modeling sets a standard
Even though
I’ve been teaching for almost thirty years, I was surprised by how valuable
modeling expected behaviors was for my students. Starting from the morning of
Day 1, I showed them (modeled) the right way to do our daily routines—how to
form the circle, how to begin class, the signal for quiet, etc.—and was
surprised by how observant they were of my demonstrations. I began to realize
that the inquiry method—modeling and asking students what they noticed, in this
case—was much more effective than giving only verbal instructions. When I
elicited responses from students after a modeling, I helped set a positive
standard for a year that included them, validated them, and demanded positive
participation in everything, even the most basic daily routines. Whenever I
modeled something, almost all of the noticing came from them, and they often
noted things I hadn’t even thought of!

Academic and social
guidelines
I also found that developing group guidelines for specific
important activities was time well spent. To begin to establish guidelines for
the sharing component of CPR, I posed this question: “What do we need to do as a
group to create a classroom environment in which students feel safe sharing
their opinions?” Students generated a list of ideas, including: Listen to
others when they share; look at the speaker when you listen; avoid
judgment comments students make; respond respectfully to anyone’s
ideas; maintain confidentiality someone’s personal story with people
outside class; be willing to share your thoughts.

We posted these
near our circle area and referred to them often before sharing. We also made a
look, sound, and feel chart for general class discussions, sharing or otherwise,
that established a solid base from which to have meaningful discussions for the
rest of the term.

Even so …
In spite of all my best efforts,
however, behavior problems did arise. About midway through the first term, for
example, I had one afternoon class to which many students arrived very wound up.
It was Halloween, and it seemed as if none of the proactive activities I’d led
them through had ever happened. Several students used the class as an
opportunity to test classroom limits; some were even being physical with one
another! I could tell that others were uncomfortable as they looked around and
observed the chaos in the class. I had to interrupt this behavior. I stopped the
activity and asked students to return to their seats in the circle.

Right then and there, we had a problem-solving meeting about what had
gone wrong with the activity and how we could make it better. During the
discussion, several students acknowledged that they had crossed the line. They
clearly knew which behaviors needed to change. We agreed to start by trying to
follow our rules.

Sweat the small stuff
This episode was a good
reminder for me. Anything worth doing is worth doing right, and is also worth
revisiting whenever necessary. It’s not good enough to set positive goals, make
group guidelines, and model desired behaviors. We also need to sweat the small
stuff—respond to minor rule-breaking when it occurs—and revisit our core values
when more serious infractions take place.

Donna Largent is a
counselor at Richmond Middle School in Hanover NH.